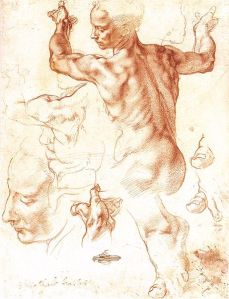 One of the life studies for the Sistine Chapel- notice the amazing use of hatching and cross hatching to add surface texture and realism!

Considered the greatest artist of all time by many,  Michelangelo was skilled at drawing, painting, frescos, sculpture, architecture- pretty much every genre of the arts!

In 1489, when Michelangelo was only fourteen, his father persuaded Demenico Ghirlandaio to pay his apprentice as an artist, which was highly unusual at the time.

He became so skilled at drawing using the Grid technique, the story goes that Michelangelo would borrow the masters’ drawings from the library (as students were assigned to do), but instead of using the grid to copy them and learn their techniques he would copy them and return the copies while stealing the originals to keep for himeslf.

Michelangelo’s Pieta, completed when he was only 24!

Extremely skilled in drawing, he was known for his incredibly realistic and lifelike figures. 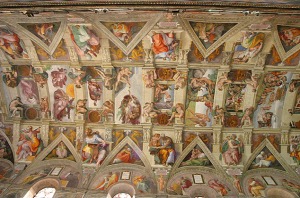 The figures painted on the ceiling of the Sistene Chapel are considered some of the very best in history.