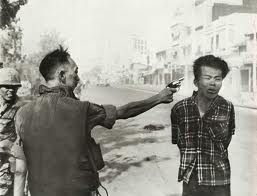 This photo is credited with starting the peace movement in the U.S. and ending the war in Vietnam

Some images have such power they have altered the course of human history. All photos tell a story, but some stories are more compelling than others…

“General Nguyen Ngoc Loan Executing a Viet Cong Prisoner in Saigon is a photograph taken by Eddie Adams on 1 February 1968. It shows South Vietnamese National Police Chief Nguyễn Ngọc Loan executing a Việt Cộng officer in Saigon during the Tet Offensive. The event was also partially captured by NBC News film cameras, but Adams’ photograph remains the defining image. There is also some dispute as to the identity of the man who is being executed in the photograph.[citation needed] It has been claimed that he was either Nguyễn Văn Lém or Lê Công Nà, a similar looking man who was also a member of the National Liberation Front and died during the Tet Offensive.[citation needed] The families of both men claimed that the Viet Cong officer in the photo looks very similar to their relative. Neither family could say for sure.[citation needed] Lém was captured and brought to Loan, then Chief of National Police of the Republic of Vietnam. Using his sidearm, a .38-caliber Smith & Wesson “Airweight” [6], Nguyễn Ngọc Loan summarily executed Lém in front of AP photographer Eddie Adams and NBC television cameraman Vo Suu. The photograph and footage were broadcast worldwide, galvanizing the anti-war movement; Adams won a 1969 Pulitzer Prize for his photograph.

The photo won Adams the 1969 Pulitzer Prize for Spot News Photography, though he was later said to have regretted its impact. The image became an anti-war icon. Concerning Loan and his famous photograph, Adams wrote in Time:

The general killed the Viet Cong; I killed the general with my camera. Still photographs are the most powerful weapon in the world. People believe them, but photographs do lie, even without manipulation. They are only half-truths. What the photograph didn’t say was, “What would you do if you were the general at that time and place on that hot day, and you caught the so-called bad guy after he blew away one, two or three American soldiers?”[8]

Adams later apologized in person to General Nguyễn and his family for the damage it did to his reputation. When Loan died of cancer in Virginia, Adams praised him: “The guy was a hero. America should be crying. I just hate to see him go this way, without people knowing anything about him.”[9][10] 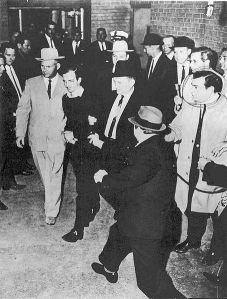 Jack Ruby about to shoot Oswald live on national TV. 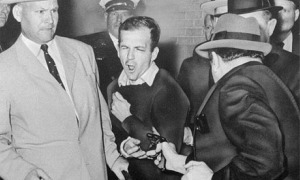 An instant before the shot that killed him, Oswald and his guard freeze in terror.

As he was being transferred, Lee Harvey Oswald (JKS’s alleged shooter) was shot point blank range by Jack Ruby. Ruby was a night club owner in Dallas, where Kennedy was assasinated.

“According to one of the arresting officers, M.N. McDonald, Oswald resisted arrest and was attempting to draw his pistol when he was struck and forcibly restrained by the police.[51] He was charged with the murders of President Kennedy and Officer Tippit later that night.[52] Oswald denied shooting anyone and claimed he was a patsy who was arrested because he had lived in the Soviet Union.[53][54][55] Oswald’s case never came to trial because two days later, while being escorted to a car for transfer from Dallas Police Headquarters to the Dallas County Jail, he was shot and killed by Dallas nightclub owner Jack Ruby, live on American television. Arrested immediately after the shooting, Ruby later said that he had been distraught over the Kennedy assassination and that killing Oswald would spare “…Mrs. Kennedy the discomfiture of coming back to trial.”[56] 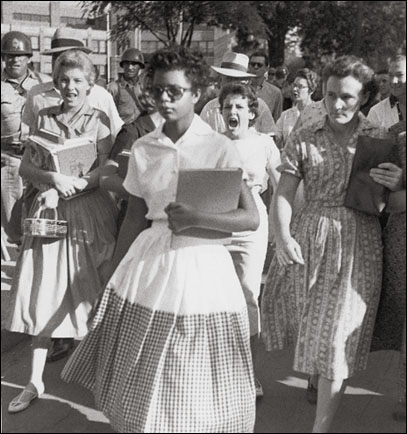 “A photograph taken by Will Counts of Elizabeth Eckford attempting to enter Little Rock School on 4th September, 1957. The girl shouting is Hazel Massery. “This image was runner-up for the Pulitzer Prize for Photography.

“Subject is shown maintaining calm and dignity in the face of protestors, physical threats, and shouting as she was the first African American student in a newly integrated school. This photo illustrated for many people the blind hate that some felt at the prospect toward African Americans attending their school. No words or alternate images can easily convey this moment, which came to define the life of the individual depicted, and the civil rights movement overall.”